The upcoming movie ‘Anya’, made in Hindi as well as Marathi, has been increasing the curiosity of the audience along with the cine world for the last several days.  The smash hit trailer of ‘Anya’ has just hit the screens. The film is set to release on June 10. The movie is currently being discussed in social media and digital media as the trailer of ‘Anya’, which arouses curiosity, has been well received by the audience.

Producer Shelna K. And Simmy co-produced ‘Anya’ with Capitalwoods under the banner of Initiative Films. This film won two awards, Best Film at the Alvsbyn Film Festival in Sweden, Best First Time Director, and Best Picture at the Falcon International Film Festival (May Edition) in London. The film has received well appreciated reviews at the Global Indian International Film Festival as well as at the Toronto Independent Festival. The film is directed by Simmy Joseph, a renowned director of South Film Industry.  Every human being has someone else, someone else within him… Likewise, every good person has a bad person within him… and every bad person has someone else, someone else who is also a good person within… At first sight, after watching the trailer, one realizes that this film is telling the story of a good ‘Anya’. It is seen in the trailer that it touches on the important issues of today such as espionage, truthfulness, sex trafficking, child labour, orphanage, farmer suicides, etc. and presents the idea of change in ‘Anya’ country. The film based on true events and sheds light on human trafficking. An attempt has been made to present the bitter reality and frightening truth of the society on the basis of a documentary.

Simmy Joseph has also written this film and the dialogue has been done by Mahendra Patil. Atul Kulkarni, Raima Sen, Yashpal Sharma, Govind Namdev, Prathamesh Parab, Tejashree Pradhan, Bhushan Pradhan, Krutika Deo, Sunil Tawde will be seen in important roles in this film. Dr. Sagar and Sajeev Sarathi has written songs for Hindi cinema, while Prashant Jamdar for Marathi. Composer Vipin Patwa along with Raam Naath, Rishi S. And Krishna Raaj has composed the music for these songs. Background music is provided by Rohit Kulkarni and cinematography is done by Sajjan Kalathil. Costume design by Neelam Sehtya, choreography by Sabha Mayuri and compilation by Thanuj. Shekhar Ujjainwal is the production designer and Nandu Aachrekar, Robin and Raju are the associate directors. 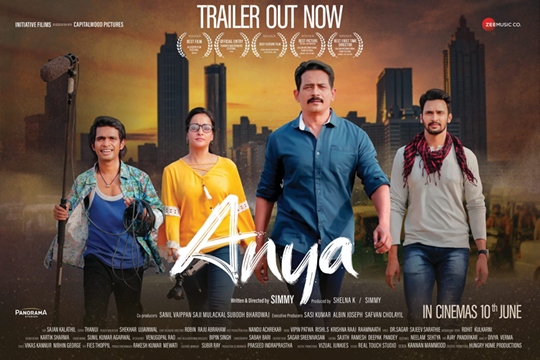