Famous singer Altamash Faridi recorded a love song “Jaane To Jaane Kahan” in his voice, composed by the music of Bollywood’s famous music composer Usman Khan. This is a very cute and beautiful song in which Usman Khan has given amazing melody. Ek Mulaqat fame singer Altamash Faridi recorded this romantic song from the super hit song of Ayushmann Khurrana’s Dreamgirl. This music video is produced by Raja Davinder Singh and directed by Sachendra Sharma. The song’s lyricist is Aamir Amjad Nadeem, who has also done the programming.

After the scintillating recording of the song at Mumbai’s AMV Recording Studio, Altamash Faridi said that Usman Khan has composed the song beautifully. It was great to sing it. The producer of this song Raja Davinder Singh and the entire team are very excited about it. We all have put in a lot of hard work, hope the audience will like it when it releases.

Music composer Usman Khan said that it is a romantic song full of emotion. Our producer Raja Davinder Singh specially came here from Goa during the recording of this. I am very thankful to Raja ji for giving me such a big opportunity. Dil Se is sung by Altamash Faridi who has sung fifty super hit songs in Bollywood.

Director Sachendra Sharma said that the song is very sweet which will touch hearts. Altamash Faridi has sung it with great gusto. A story of love will play in its video. After this song, a different time will come for the composer Usman Khan, he will get a high position.

Producer Raja Davinder Singh said that the video of the song will be shot soon. With the entire team of Music Video I am sure that a better song will come out. 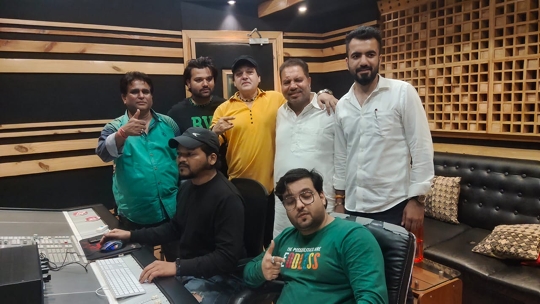